Though Fortnite Battle Royale is now an up-and-coming mobile game on iOS, it began as a brawl mode for Fortnite's console and desktop versions (PS4, Xbox, Mac, and PC). And thanks to Epic's underlying account system, you'll be able to play with friends on (almost) any other platform. Here's how to set it up and make it happen! 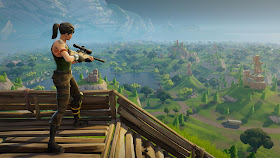 Fortnite Battle Royale is, by default, a solo game: It's you vs 99 other people on the map, and whoever makes it to the end, wins. But for those who like to play with friends, Fortnite also offers two multiplayer modes: Duo and Squad.

Duo is what it sounds like: You pair up with one other friend, and together you attempt to wipe out the other 98 folks on the map. Squad mode lets you add to two more people, for a total of four.

Here's where the cross-platform fun comes into play. You can't randomly decide, as an iOS user, that you only want to play with PS4 users. Instead, cross-platform play happens when you invite friends to play in Duos or Squads. You'll be able to invite any friends, on any platform* — as long as they've created an Epic Games account first. (For console users, this is separate from their PSN or Xbox Live account.)

*Note: When making a Squad, iOS users can pair up with friends on any platform, but keep in mind: If you have two friends who have a PS4 and Xbox One respectively, you'll only be able to play with one of them — Sony currently prohibits PS4 Battle Royale users from playing with Xbox users, even if you're the initiator of the match. It's dumb, yes, but unfortunately, it's on Sony to fix it.

Once you have your Duo or Squad set up, Fortnite will auto-populate your next game with players using either mobile devices, consoles, or PCs, depending on your party makeup. If you have a Mac or PC user in your party, the other players in the game will come from Mac & PC-land; if you only have console and mobile users, the remaining players will be populated from your friend's console (PS4 or Xbox); and if you're playing with an all-mobile crew, you'll stay on the mobile side of things.

How to set up your Epic account for cross-platform play

To start, anyone you'd like to invite needs to have an Epic account, as we mentioned. Here's how to add them as a friend:
Once your friend confirms the addition, you'll be ready to play with them whenever they're online.


How to invite friends from a PS4, Xbox One, PC, or Mac to a Fortnite Battle Royale game on iOS